So I bought a domain (at hover.com) changed the name servers to mine ns1 and ns2 .adamprocter.co.uk I then created the domain on my VPS (virtual private server) run by Cloudabove, I use Plesk to do this and clicked to include Lets Encrypt. Removed all the default files and added a very basic index.html for now. 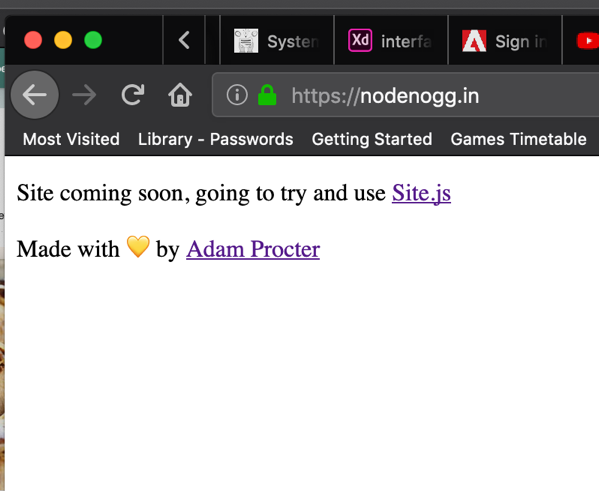 So now step one I thought was to get Site.js running on my local machine and then try and sync it to my remote host. I visited sitejs.org , I clicked the suggested always view the source code link, that hit a 404, hmmm I’ll carry on anyway. Even though I couldn’t review the code as the site encouraged me too, but it is day one so maybe its probably a minor over sight. Messaged Aral to let him know.

My intial concern was that it was running at localhost without an option I could see to pick a port, which made me assume it would be port 80 but I couldn’t tell, would this break other things, I didn’t want to break any of my other webbed stuff, such as the vue ui stuff I have been working on. Site.js seemed to suggest uninstall would be easy so I thought I would go ahead anyway. (that maybe a mistake…)

Ok so first to run the wget command as Site.js advises. 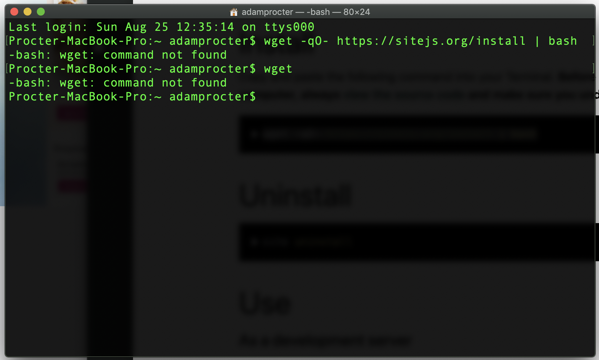 Hmm that wasn’t what I expected. So I started to search (on Duckduckgo of course) macOS wget, first site suggests I need to install homebrew, I have been down this route before and wasn’t too keen to install home-brew and one site suggesting this then followed with the line;

The below steps are deprecated and likely no longer work at all:

So I kept looking and another site I found looked promising as was published in 2019 and explained you can install wget via Xcode, that seems like a fine way for me as I have Xcode. The site did however suggest installing Xcode command line tools via terminal but as far as I was aware the command line tools are now bundled with Xcode (since 10.9) so I skipped that step.

When I extracted the file I suddenly thought this may not be the latest wget so I user my Browser (Firefox) to visit ftp.gnu.org/gnu/wget/ and realised that wget-1.19.5 was indeed an old version. Ok so I deleted the files that had been downloaded and extracted. And this time I used this line instead, which should get me the latest version.

and then I used cd into that folder which was wget-1.20.3 and run ./configure … seemed to be going well … and then not

The site advised if you get a config error try ./configure –with-ssl=openssl

As I had been at this for over an hour now and it was getting late. I decided to stop for now. Part 2 can be read here